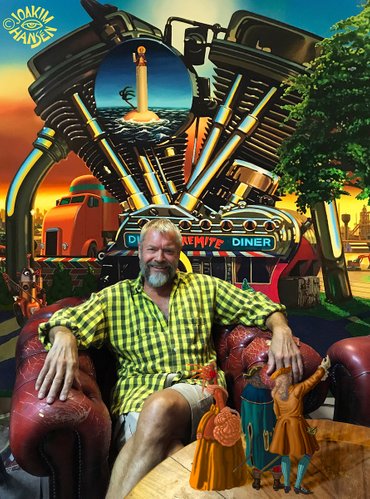 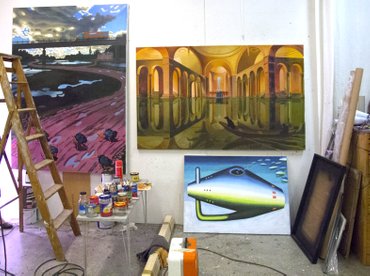 Work in progress at my studio

"Dreams, visions and ideas are continuously born and he works fervently to make them concrete" 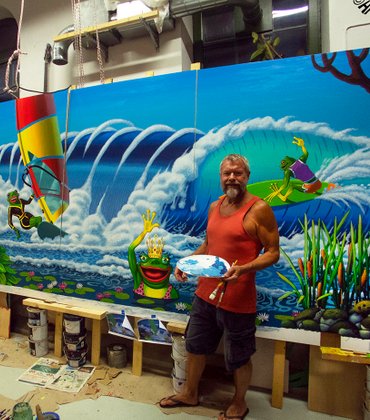 Joakim is a multidimensional artist who works with different types of artistic projects.

After formal art studies in the 70’s, big city life became his next school. He created posters for rock and jazz festivals, the Modern Museum in Stockholm (Moderna Muséet) and for the denim brands Lois, Warrick and Levi’s.

Joakim also designed logos, stickers and album covers. He painted murals outside several boutiques at Gamla Brogatan, the Carnaby Street of Stockholm. He is especially recognized for the mural and posters he made for Sko-Uno, Stockholm’s cult mod/punk shoe store.

During the 80’s Joakim undertook large mural projects for conference centers, large venues such as New Sport House in Stockholm (indoor skateboard park) and the boardroom of AGA (a Swedish industrial gas company). He also did set design for the Cullberg Ballet.

Since 1978 Joakim has worked on numerous artistic assignments for Stockholm’s historical amusement park Gröna Lunds Tivoli. At Gröna Lund, Joakim has worked with a variety of architectural spaces, techniques and materials ranging from creating buildings housing thrill rides to sculptures and murals as part of the phantasmagorical ambiance.

He has designed many of the classic flagship ride environments such as Lustiga Huset (the Fun House), Blå Tåget (haunted train), Kärlekstunneln (Tunnel of Love), and the bumper cars. He also created the environments for the new feature rides: Vilda Musenhuset (the Wild Mouse roller coaster), Fritt-Fall (Free Fall drop tower), the 11 buildings around the retro-futuristic street Jetgatan, Eclipse, The House of Nightmares and the palace and tower Ikaros with a golden huge sun on top which now is included in the skyline of Stockholm.

Joakim has his studio in Stockholm where he is primarily focused on painting.

In over more then 20 years he has had at least two exhibitions per year around France. He also exhibits in Italy, USA, Spain, Belgium and Denmark.

He has collaborated with several French art groups and is now member of the group ”Evocation narrative”.

In Sweden he is a member of the surrealistic group 4X. The group 4X collectively put on exhibitions while also publishing an experimental and free ranging surrealist cartoon series.

He enjoys exploring themes related to mankind’s complicated relations with the planet we inhabit.

He is influenced and inspired by what he sees and his travel experiences. The flow of mass media, social media, politics, conflicts, advertising, comic strips, video games, movies and so forth are expresses in his series of paintings in large and small formats and sculptures.

Joakim is engaged in a continual dialog with art’s historical forefathers while looking for signals from the future. This encompasses an eager collecting of information which then illuminates the shadow world of the subconscious. Dreams, visions and ideas are continuously born and he works fervently to make them concrete.

His big canvasses are constructed like symphonies with numerous details woven in a rhythmic flow where color and light create the mood.

- Our globe, slowly rotating in the luminance of the sun, gives us a daily cascade of sentiment and never ending source of images to draw from.